Zo spomienok R. Hössa: By the will of the Reichsführer SS, Auschwitz became the greatest human extermination centre of all time. When in the summer of 1941 he himself gave me the order to prepare installations at Auschwitz where mass exterminations could take place, and personally to carry out these exterminations, I did not have the slightest idea of their scale or consequences. It was certainly an extraordinary and monstrous order. Nevertheless the reasons behind the extermination program seemed to me right. I did not reflect on it at the time: I had been given an order, and I had to carry it out. […] If the Führer had himself given the order for the “final solution of the Jewish question”, then, for a veteran National-Socialist and even more so for an SS officer, there could be no question of considering its merits. “The Führer commands, we follow”, was never a mere phrase or slogan. It was meant in bitter earnest.

O svojej úlohe vo vyhladzovaní: Again and again during these confidential conversations [ide o vypočúvanie pri vyšetrovaní – pozn. T.S.] I was asked: is it necessary that we do all this? Is it necessary that hundreds of thousands of women and children be destroyed? And I, who in my innermost being had on countless occasions asked myself exactly this question, could only fob them off and attempt to console them by repeating that it was done on Hitler’s order. I had to tell them that this extermination of Jewry had to be, so that Germany and our posterity might be freed for ever from their relentless adversaries. There was no doubt in the mind for any of us that Hitler’s order had to be obeyed regardless, and that it was the duty of the SS to carry it out. Nevertheless we were all tormented by secret doubts. I myself dared not to admit to such doubts. In order to make my subordinates carry on with their task, it was psychologically essential that I myself appear convinced of the neccesity for this gruesomely harsh order.

Zo správy Miklósa Nyiszliho, väzňa č. A-8450: The laboratory and dissecting room had been set up at the wish of my boss, Doctor Mengele, to satisfy his scientific ambitions. […] The concentration camp here opened up unlimited opportunities to perform anatomical and pathological examinations on the very numerous cases of suicide as well as research into the phenomena of twins and the growth disorders in both dwarfs and giants. There was no other place in the world where you could find so many bodies for dissection. I knew from my own experience that the world’s most renowned and largest clinics, institutes of forensic medicine and autopsy annually received no more than 100 to 150 bodies for dissection. At Auschwitz concentration camp, on the other hand, bodies available for “research” ran into millions. Anyone who crossed the camp gate could end up on the dissecting table. […].

When a new transport disembarked onto the ramp and the people started file up, one of the SS-men immediately approached them in search of twins and dwarfs. Mothers expected this to be something good for their children and handed them over without hesitation. The older ones assumed that by being twins they were an interesting subject for scientific research and that could only be to their advantage, so they volunteered. The dwarfs thought likewise. The twins and dwarfs were therefore separated from the rest and went to the right side of the platform. SS guards escorted this particular group to a special barracks. There these prisoners received good food, comfortable beds, the necessary hygienic facilities and favourable treatment from the wardens.

This was Block 14 of Camp F [BIIf], whence the prisoners were escorted to the aforementioned experimental block in the Gypsy camp and it was there that they were subjected to all the medical examinations that could possibly be performed on a living human being. Blood tests, lumbar punctures, blood transfusions between twins and innumerable other experiments; all very painful and exhausting. […] The same procedure applied to the dwarfs. The experiments were carried out – under the presence of medical examinations – in vivo, that is on living organisms, and were in no way able to fully explain the phenomenon of twins from the scientific point of view. They were superficial, revealing very little on the subject. It was therefore necessary to move on to the next, most important phase of research: the post-mortem examination and the comparison of normal organs with ones that were malformed or simply sick. Such examinations required corpses. Because general autopsies and examinations of particular organs had to be carried out simultanously, the twins in the experimental barracks of section D [BIId] died simultaneously: Doctor Mengele killed them.

Zdroj: Miklós Nyiszli, I was doctor Mengele’s assistant: the memoirs of an Auschwitz physician, Oświęcim 2001, s. 41–43.

O doktorovi Mengelem: This was the most dangerous type of criminal, one who also had incedible power at his disposition. […] This same criminal would spend hours sitting beside me in among the microscopes, test tubes and flasks or standing at the dissecting table in a bloodstained apron examining and rummaging with bloodstained hands. All for the sake of increasing the procreation of the Germanic race, so that ultimately there would be enough Germans to populate the Third Reich’s Lebensraum territories. That was, once they had been cleared of Czechs, Hungarians, Poles, the Dutch and other nations.

Zdroj: Miklós Nyiszli, I was doctor Mengele’s assistant: the memoirs of an Auschwitz physician, Oświęcim 2001, s. 44.

Zo svedectva, ktoré po vojne podal SS-Scharführer Franz Suchomel: From my activity in the camps of Treblinka and Sobibor, I remember that Wirth in brutality, meanness, and ruthlessness could not be surpassed. We therefore called him “Christian the Terrible” or “The Wild Christian”. […] The brutality of Wirth was so great that I personally see it as a perversity.

Zo svedectva, ktoré po vojne podal SS-Hauptsturmführer Franz Stangl: Wirth stood in front of the building [of the gas chamber] wiping his sweat off his cap and fuming. [Hermann] Michel [the sergeant-major of the camp] told me later that [Wirth] had suddenly appeared, looked around the gas chambers on which they were still working, and said: “Right, we’ll try it out right now with those twenty-five working Jews. Get them up here.” They marched out twenty-five Jews up there and just pushed them in and gassed them. Michel said Wirth behaved like a lunatic, hit out at his own staff with his whip to drive them on[…]

Zo správy Juliusa Eisensteina, nar. 1921, väzňa tábora v Płaszówe, ktorú zapísal autor knihy: He tells of the time his work group and several other crews were headed back to camp after a day of street cleaning. Goeth was waiting inside the camp gate, which slammed shut just as Julius’s group approached. Goeth noticed that some of the inmates had bulging pockets. One had bread, one had a salami, and one had canned food. “So Goeth started to holler, ‘Alle töten!’ ‘Shoot them all!’. The ‘blacks’ were there [black-uniformed Ukrainian guards]. [They] picked up the whole group – fifty, sixty people – and marched them up the hill and killed them. Maybe three or four had contraband, but it didn’t make any difference to him.

Zo správy Murrayho Pantirera (počas vojny Mejzesza Puntierera), nar. 1925 o veliteľovi tábora v Płaszówe: Every day, he would shoot somebody else at random, hunting like an animal in the jungle. He wore three hats: an officer’s hat; a plain cap; like a soldier. When he put on his Tyrolean hat, we were in terrible danger. Regardless where I was working, I would always run to the latrine, because he never came in. He would come to the barracks and wouldn’t leave till he shot a few people.

Zo správy nemeckého hlavného lesníka Heinricha Maya o Hansovi Bothmannovi a židovských väzňoch, ktorí pracovali na spaľovaní telesných pozostatkov zavraždených obetí tábora, jar 1942: About thirty young and middle-aged men worked there. None of them wore shirts. Bothmann told me he changed the workers every week. They “wore out” quickly and he was constantly on the lookout for new labor forces among the transported Jews. The worker’s anklers were tied together with thin steel chains so that they could walk, but not run. Bothmann said that those people asked him to shoot them dead after one or a two days, because they were no longer able to do the job. In such cases he drew a red cross on their backs; it was a sign for the guards to shoot the victims in the evening. They had to lie down on the ground with their faces down, and were shot in the head. The same fate met those who did not work diligently enough. […].

During my last visit to the graveyard, when juniper seeds were being sown, Bothmann showed me the bone grinder. In the barracks there were a few full sacks. Bothmann said to one of the people employed there: “Itzig, bring me some meal from the sack.” The old man untied on of the sacks and brought two handfuls of snow-white finely ground bone meal. Bothmann asked him: “Do you know what this is?” The man was silent. Bothmann explained: “These are your fellow countrymen, people of the same race as you (Rassengenossen).” […].

An old woman and her daughter wanted to commit suicide. She asked for a noose. Bothmann threw her a bra. The daughter lay on the ground and the mother put the loop around her neck. When the mother tightened the loop, the daughter started screaming out of fear. Bothmann and the accompanying criminals watched the horryfing scene with diabolic grimaces on their faces. Then Bothmann said: “Well we are more humanitarian than that so get in the truck!” [ide o špeciálne skonštruované auto – plynovú komoru – pozn. TS] 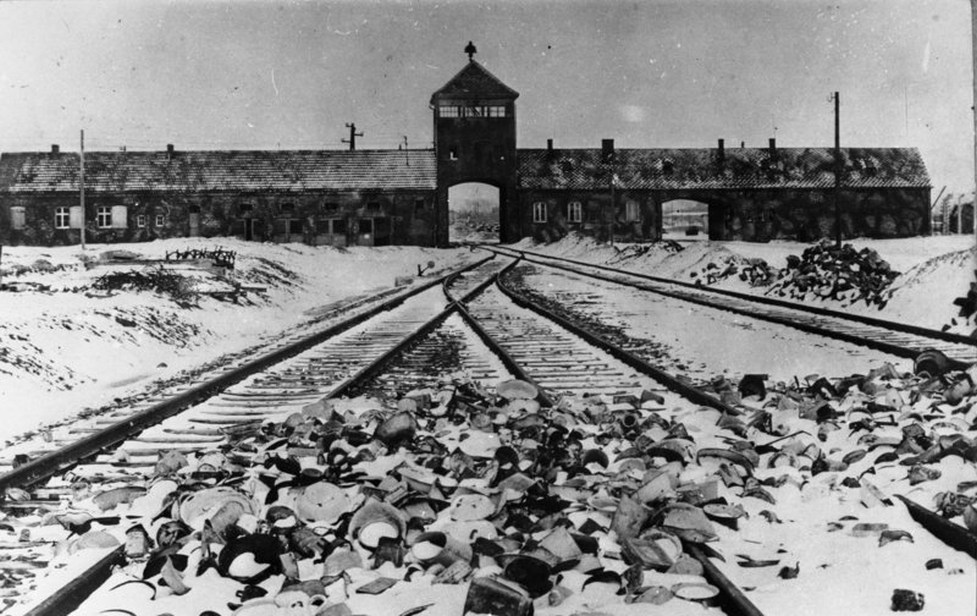